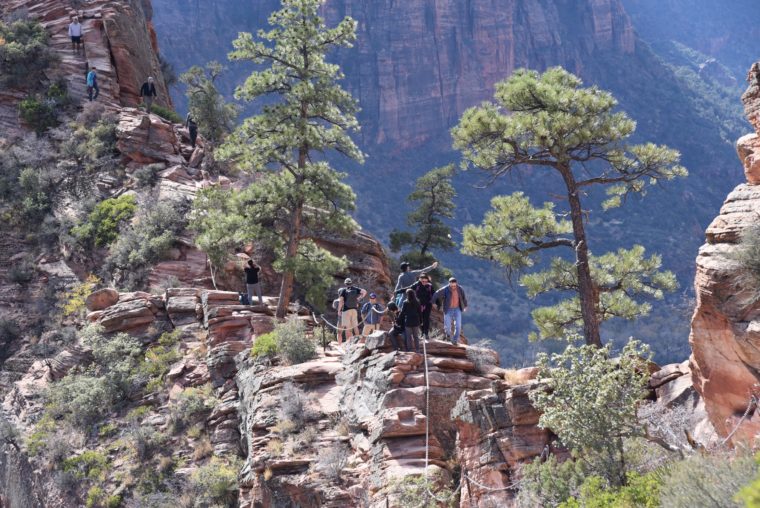 There it was. The thing that kept me up at night, that woke me from sleep. It was Angels Landing in Zion, one of the most exciting hiking trails in the National Parks.

My husband and some friends had hiked Angels Landing years ago and still tell the story. When we decided to make the trip again to Zion National Park over our boys’ Thanksgiving break, my husband mentioned that he wanted to take our boys on the trail. I immediately panicked.

The way he had described Angels Landing was terrifying; you hike up holding on to chains because it’s so steep. There are cliffs on each side with nothing stopping you from plummeting hundreds of feet to your death.

The day my husband hiked Angels Landing it was freezing and windy. His hands could barely hold on to the chains. My boys, 11 and 12, were absolutely not doing it.

But then we got there. It was a beautiful fall day, warm and sunny with a light breeze. I told my son, who was then 12-year-old, that he was not doing it even though there were kids younger than he was with moms that looked just like me – some older and some younger.

We had already hiked up about 1,000 feet on the Western Rim Trail and I felt good. The conditions were perfect and who knows if we’d ever get back there again.

My son begged me to go. “Why can’t we go?” He asked over and over and over. Finally, a woman sitting on a rock turned to him and said, “Because she doesn’t want you to die.”

“See,” I said. “No one thinks it’s a good idea.” But after going back and forth and telling myself that I was a terrible mother for even thinking of it, I finally said, “OK!”

I was very nervous. But the thing about being a control freak is that if you control everything then it will be fine. Which is what I told myself as we prepared to start the hike.

Phones away, I told my son. Pay attention. Stay Close. Listen to me. My husband and 11-year-old went off to do a different, strenuous hike and off we went.

It’s a popular hike and there were a good amount of people on the trail. It wasn’t scary at all once we started hiking. Well, there was one scary moment when I lost my footing and almost fell. If I had been in the wrong spot, it could have been very bad. But I shook it off and made a point to pay attention to where I was stepping (and never again buys shoes on sale that don’t fit right just because they look cool).

I honestly don’t remember how long it took to get to the top, but we had a great time getting there. We were very close to the group hiking in front of and behind us.

We listened to one 30ish man talk about traveling around the world guiding people through beautiful places. There was a young woman who was camping by herself who had chatted up a young guy who was driving around the country in his Toyota Camry visiting National Parks and sleeping in his car. It looked like they were going to hook up, but we lost them on the way down. It was fun for my son to hear about the cool adventures people were having and imagine that he could do the same someday.

Once we got to the top we took a rest, had some water and took in the incredible view.

The hike down went by pretty fast, but much more crowded than the way up. There were times when we had to hold on to the chain and wait for people to go around us or squeeze by other people.

It’s one of those things where it only works when everyone does what they are supposed to do, which was why I was alarmed to see a guy run past us, hopping from rock to rock, up the trail. We also saw a man with a baby in an external backpack baby carrier. I’m sure he was safe, but it made me nervous.

Angels Landing didn’t turn out to be scary – just really fun. It turned out to be one of the best days of my life.

I’m so glad that I didn’t let fear stop me from doing something that my son wanted to experience and was perfectly capable of doing. The best part of the hike was getting to talk to him and hear him tell stories. We’re so busy with school, work and life that we don’t have much time to just chat about what’s going on around us. It was an incredible bonding experience that we won’t forget. 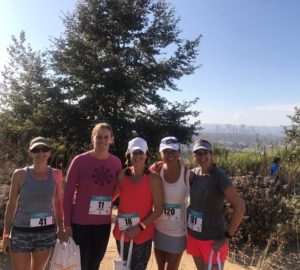